An old piece of dead Elm bark from the farm.  The most interesting thing I’ve ever painted.

I’ve been following Formula 1 on and off for the last 20 years.  This painting shows one of the most horrific fatal accidents in the history of the motorsport.  On lap 8 of the 1973 Dutch Grand Prix, Roger Williamson, a young English rookie driving his second race, had a sudden tyre deflation on his car.  The car rebounded off a barrier, flipped upside down and the fuel tank caught fire.  Williamson was trapped in his overturned car.  David Purley had been racing just behind him and on seeing the accident, parked his car and desperately ran towards the blazing machine.  Williamson was still alive, screaming.  Later, Purley said he heard him plead, ”For God’s sake David get me out of here”.  First, Purley tried to flip the car right side up, but it was too heavy.  Then he got a fire extinguisher off a nearby marshal but it was hopeless against such an intense fire.  The painting records his second attempt to try and right the car, which didn’t work.  After that, he was ushered away by one of the marshals.  The marshals weren’t given fireproof clothing in those days so they couldn’t assist in pushing the car over, although one did.  No other driver stopped, some misunderstood, thought Purley was the driver of the burning car.  Purley kept waving at them to slow down and stop and help.  Amazingly the race wasn’t stopped.  The authorities thought that Purley drove the burning car not knowing Williamson was still in it.  Apparently.  The race continued so a fire truck which was fairly close couldn’t get there straight away as it would have been driving against the flow of traffic.  It took several minutes for it to arrive.  Williamson had suffocated to death by then.  He was 25.  Purley, an Englishman, was given the George Medal for bravery a few months later. 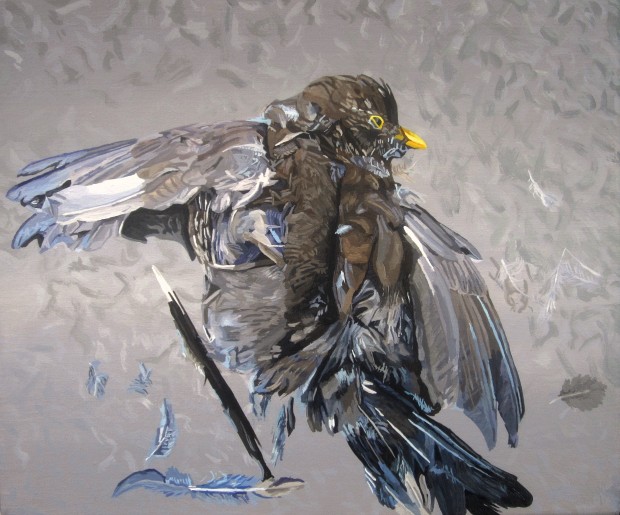 Wanted a big change of subject here. It’s important to do stuff that appeals to you alone now and again, and not constantly pandering to what the market would like.

About half a mile from my home stands an old Medival church, surrounded by headstones dating as early as the late 18th century. It’s one of the most intact churches in the region. I was pleased with the soft indirect lighting effect on the stonework. I spent over a month painting it.